Ozone IV therapy is one of the most popular and common ways to administer ozone therapy, and involves sending ozone into the patient’s blood via an IV, which, in turn, transports it to all the other body parts.

The therapy has many amazing benefits, such as:

– It balances the immune system, by enhancing its response in case a disease is suppressing it, and calming down the immune response in case a disease is causing the same.
– It helps in the production of antioxidants that deactivate the free radicals. Hence, it slows down ageing, and reduces any oxidative stress in your body.
– It works down at the cellular level and effectively fights the infections and keeps them at bay.
– It can give a boost of new life and refreshment to our cells and boosts our ability to tolerate pain.

Further, the IV ozone therapy is useful against fighting a wide range of infections, diseases, and bodily conditions that are otherwise hard to treat.

As ozone therapy has no side effects, it is also used as a supplementary therapy alongside ongoing treatments.

However, there are many doubts, questions, and myths surrounding the entire spectrum of ozone therapies, including IV therapy.

Here, we discuss the therapy at length and explore its benefits in various diseases. We also discuss the administration technique and ozone IV therapy cost.

So, take a thorough read and get the best answers for all your queries and doubts.

What Is Ozone IV Therapy?

The process resembles any other IV administration but differs in one critical aspect.

The patient who wishes to get the ozone IV therapy has to first give their blood sample. The medical-grade ozone is then mixed in this blood, and the mix is then sent into the patient’s body with the help of an IV.

This therapy has been found highly effective in treating many critical infections, autoimmune diseases, speeding up the healing process, and accelerating the recovery of patients suffering from life-threatening conditions, such as cancer, AIDS, etc.

Now that we have covered the introduction, let us move on to learn the exact procedure of ozone IV therapy.

How Does the IV Ozone Therapy Procedure Work?

Standard equipment used for administering the blood ozone IV therapy is shown in the following image: 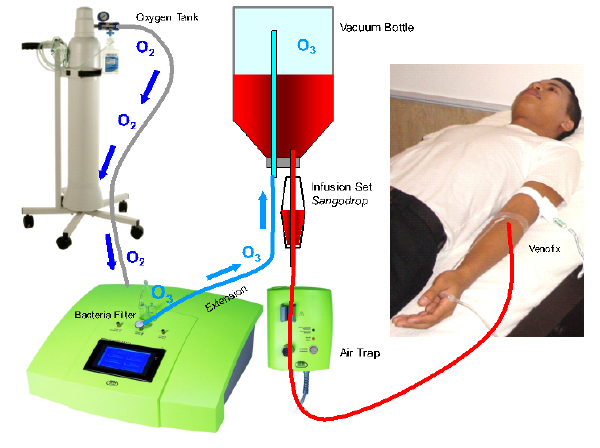 Ozone IV therapy cost and duration varies from person to person and depends on the disease a person is suffering from as well as its severity.

As shown in the image given above, the ozone that is used to administer the ozone therapy is generated from a high-quality medical-grade ozone generator. This generator generates ozone from 100% pure oxygen only.

This ozone is then mixed or dissolved in the patient’s blood sample using an air trap to regulate the pressure and volume of the ozone gas that is mixed.

The ozonated blood is then sent back into the patient’s body via an IV as shown in the image.

The procedure is generally painless as you are going to feel only the initial prick of the IV, and resembles any other IV administration, such as glucose, antibiotics, etc.

Further, there is no whatsoever recovery period that a patient should observe once the ozone IV infusion is complete. The number of sessions a patient has to take depends on the severity of the condition for which they are taking this therapy.

The ozone IV infusion is also called direct IV ozone therapy as it directly sends the ozone gas into the patient’s body. Also, this is the most effective way to administer ozone therapy, as the gas is dissolved in the patient’s blood, and gets transported to the entire body via the same.

Next, we discuss the conditions and diseases the blood ozone IV therapy can treat.

Ozone is a natural disinfectant, anti-bacterial, anti-fungal, and anti-microbial gas. It is highly effective in fighting all kinds of infections, such as Candidiasis, upper-respiratory tract infections, MRSA, Herpes, AIDS, etc.

Some other dand iseases and body conditions where ozone IV therapy is of extreme importance are:

So, it is highly effective against a wide spectrum of diseases and body conditions. It is also used for general and overall body health and cosmetic benefits. This is because ozone penetrates down to the cell levels and gives them a boost of refreshment and life.

Thus, your skin glows from within and appears more youthful and radiant.

Next, we are going to share some more benefits of ozone IV therapy that would remove your doubts and reservations about the procedure.

While we have been discussing the various benefits of ozone throughout the write-up, in this section, we are going to share some clinical benefits of the procedure.

Ozone also produces a number of useful proteins in our body that actively fight cancer cells and help the patient to get well soon.

Finally, the therapy increased the tolerance levels of pain in these patients.

There are a number of myths associated with ozone therapy that we have covered in the next section.

There is no harm of ozone IV infusion therapy when it is done under the supervision of an expert professional and administered by professional nurses. Also, we recommend opting for ozone therapists that use only high-quality medical-grade ozone generators for the best results.

Now, ozone is poisonous when it is inhaled directly as it can cause irreversible damage to our lungs. But, in IV ozone therapy, the gas is not inhaled. In fact, no ozone therapy involves direct inhalation of ozone gas.

So, you can take it without any concern.

No, there is a lot of supporting research for all types of ozone therapy, and some of the references are as follows:

We hope this write-up resolves your doubts and reservations about ozone therapy. For more information and to get started with ozone therapy for you or someone you know, please get in touch with our experts. 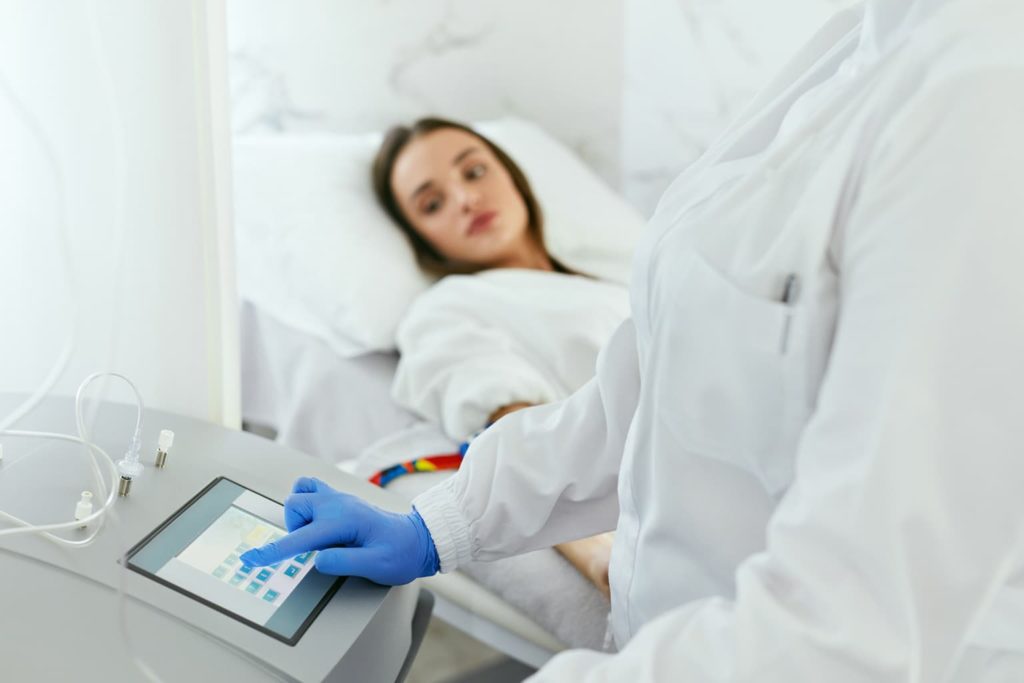 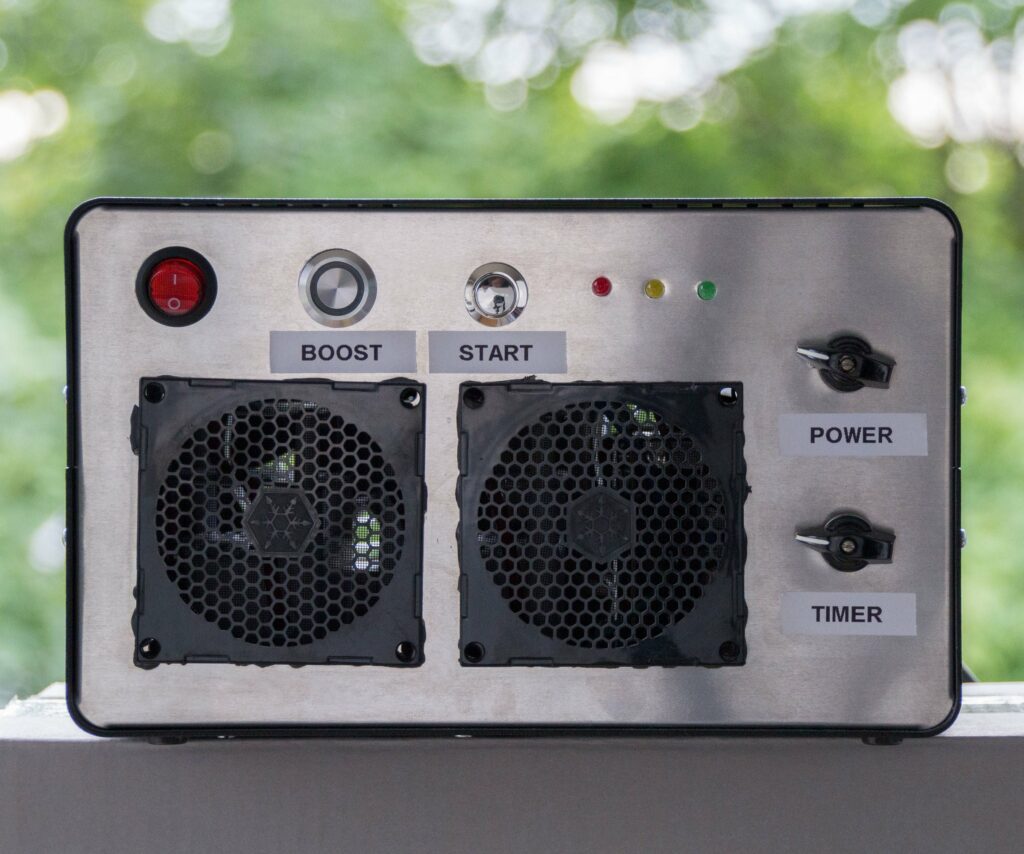 2 thoughts on “How Does IV Ozone Therapy Work?” 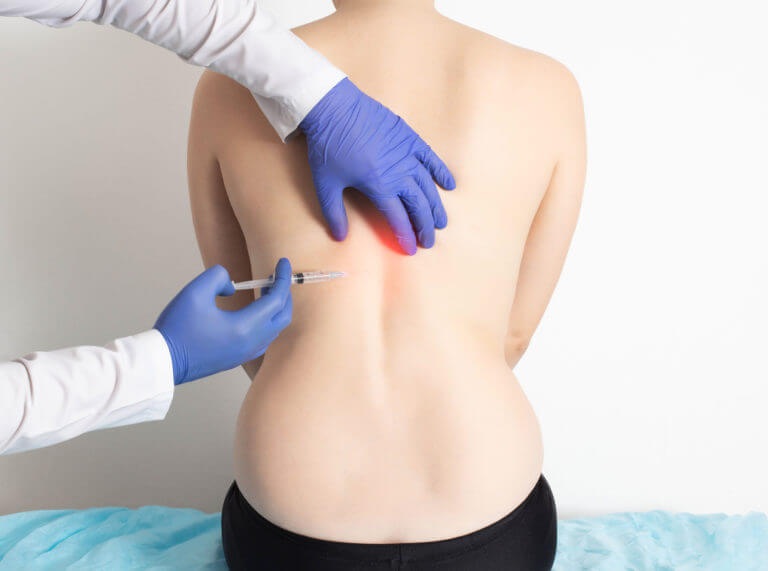